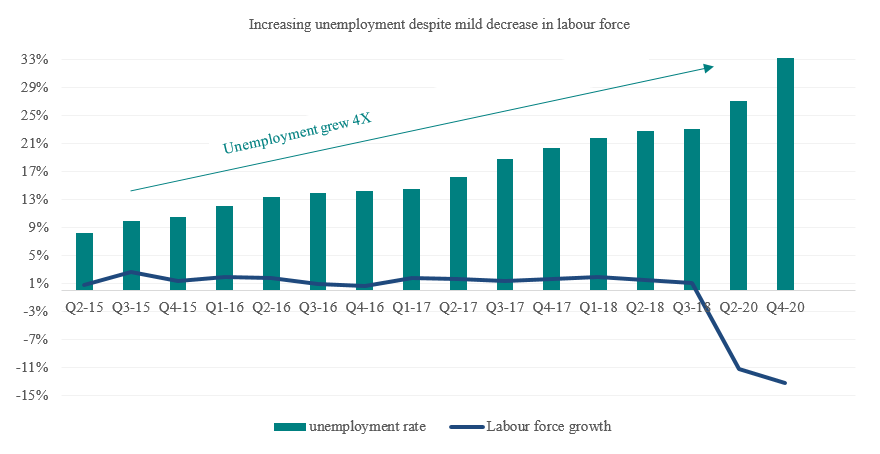 “And the Global Music Album award goes to … Twice As Tall by Burna Boy.” That was the announcement that sent Nigeria’s Twitter space agog on 15 March 2021 when the Grammy Academy revealed that Burna Boy had won the Global Music Album Grammy award, having failed to win it in the previous year with his African Giant album. Perhaps in what seems like a genuine coincidence, on the same day, the National Bureau of Statistics (NBS) released the Q4-20 unemployment data for the so-called giant of Africa, revealing that the headline unemployment rate grew six points taller from 27.1% to 33.3% during the period. However, this data should not come as a surprise as it is primarily underpinned by traceable macroeconomic policy mishaps deployed in recent years and structural fault lines in the economy.

Delving deeper into the unemployment data, underemployment, which measures the number of people who engage involuntarily in economic activities that underutilise their capability shrank from 28.6% to 22.1%. Furthermore, the data revealed that you have to be educated up to the Doctorate level to have an 83% chance of being employed. Similarly, A-Levels holders reported a 51% unemployment rate whilst higher certificate level holders like BSc reported a 40.1% unemployment rate.

Meanwhile, the most disturbing number relates to the youth: If you’re between the age group of 15-24 years, 7 in 10 of your mates are likely unemployed or underemployed.

But it was not always like this. If we compare Q4-20 data with quarterly unemployment rate data from 2015 till date, the labour force reported a stable growth rate of 1% before the sharp decline in Q3-18. However, the unemployment rate advanced fourfold during the same period. This reveals the difficulty the government is facing in creating employment.

Since President Muhammadu Buhari’s re-election in 2019, the country has faced a myriad of social and economic challenges. Inflation had surged from 11.40% in May 2019 to 17.33% last month; the Naira has been devalued three times, losing 33% of its value, insecurity has increased, and the general investment climate has waned. All these have happened while Nigerians have not seen any meaningful increase in their economic welfare: the country slumped into a second recession in five years. Many states have found it challenging to implement the new minimum wage signed into law in 2019. We also note that even if all the states had implemented the new minimum wage, the total number of civil servants to the entire labour force is considerably low. To sum it, you would still be worse off if you hold 2X the same Naira note you had in 2010 today.

In 2018, the World Poverty Clock reported that Nigeria took the giant step in overtaking India as the World most extreme poor country with a population of 86.9 million impoverished people. As we came to know it, Nigeria is the World poverty capital. What has changed since then? Not much, the National Bureau of Statistics has since confirmed the country’s leading position, reporting that over 40% of the population live in extreme poverty. In fact, in 2020, the World Poverty Clock said that in every minute, four people in Nigeria fall below the extreme poverty threshold of $1.90. 2020 rounded up a very challenging decade for Nigerians.

The problem is, Nigerians don’t have enough to spend; the per capita income has hovered around N5,600 in the last five years. Compounding this, the Nigeria Living Standard Survey released by the NBS in 2019 show that Nigerians spend 57% of their income on food, which is in stark contrast to the USA, where 10% is spent on food; China, where 27.9% is spent on food and Brazil where 17.5 % is spent on food.

The amount Nigerians spend on feeding informs the economy’s low living standard. That said, looking at this amount in isolation will reveal little about the economy until we look at the economy’s composition. Between 2015 and 2020, agriculture commanded about 27% of Nigeria’s total GDP, and it was the most stable component during the same period. People have to eat to live!

Yet, while people have to eat to live, the World has moved beyond committing too much to agriculture as it is a low-income venture; moreover, technology can have a significant multiplier impact on farm outputs. Also, the sector is prone to seasonal changes. It is increasingly exposed to the adverse impact of climate change, thereby leading to high and seasonal unemployment in Nigeria and continued low-income base employment during the planting season.

Besides, with 57% of total income expended on feeding, 43% is allocated to shelter and other needs. Invariably, savings and implication national savings are starved, leading to weak investment and a vulnerable economy.

This weak investment can be seen in the country’s gross capital formation, which grew at an average of 3.2% between 2010 and 2019. This looks okay until we compare it with some other lesser populated but relatively industrialised economies in Africa. Between the same period, Kenya printed 5.7% growth, Egypt advanced its investment by 6.5% growth rate while Nigeria undershoots Ethiopia by 17%. We, however, note that Nigeria performed better than its biggest competitor on the Africa continent – South Africa, as South Africa reported a meagre 1.26% growth during the years under review.

Similarly, when we assessed the GDP’s gross capital formation contribution, Nigeria’s gross capital formation underperformed four of the five countries we compared it with. Between the period under review, Nigeria reported an average growth rate of 16%, underperforming South Africa’s 19% growth, Kenya’s 20%, Ghana’s 23% and Ethiopia’s 23%. The country only outperformed Egypt, which reported a 15% gross capital composition. These are all countries with less poverty incidence.

If we assume foreign direct investment (FDI) as a proxy to assess investment climate in Nigeria, FDI in the last ten years reveals two things: (i) FDI component to total investment flows into the country is low (ii) FDI has been erratic – mainly following the pattern of crude oil price movement. In sum, this direction and dynamics of FDI show investors are wary of making long-term and risky investments in the country.

Low relative consumption level, low-income base, high poverty level, low relative investment level and weak diversification of the economy are all written over the Q4-20 unemployment report released by the NBS. But is it not all-gloomy and murky for the country as the government makes hard choices.

The coronavirus presented the government with the opportunity to correct some of the economy’s structural bottlenecks. In 2020, the government partly allowed electricity tariff to reflect the market price thereby creating an encouraging pathway for investors to increase investments, increase competition and reduce efficiency loss, which would have a knock-on impact on other sectors of the economy.

Last month, the minister of petroleum revealed that Nigeria would end subsidy payment in April – about time they did! The deadweight loss of the subsidy payment on the economy is alarming.  The GMD of NNPC, Mele Kyari, admitted that the government pays an estimated N159 bn monthly (N1.4trn annually) as petroleum subsidy at the current average crude oil price of $65pbd. This is not just sustainable. Comparing the estimated yearly subsidy payment with the amount budgeted for education in the 2021 budget shows that subsidy payment will overshoot education expenditure by N250 bn. Hence, is removal the right policy choice? Yes, is it the right time? No, should the country wait for the right time? Well, No, because nobody knows when the right time will be.

There is no magic wand to achieving sustainable development. The process entails making hard choices, painful trade-offs and well-thought-out trial and errors. That said, in all countries that have experienced a reasonable transition from low-income to middle-income countries and high-income, they have put in place some primary economic stimulants. First, stable power supply, second, improved transport system and logistics and third, strong institutions that will ensure contracts are respected and companies operate on a level playing ground.

However, I will add a fourth factor – security for obvious reasons. Over the last decade, the country has seen increased security challenges ranging from terrorism, banditry, and kidnapping, resulting from the high number of youth unemployment and glaring poverty level. If the government can focus squarely on these four cardinal challenges and improve them considerably, the knock-on effects will be felt across other sectors.

In addition to the preceding, the government should try and shift the economy’s production base from low-income sectors like agriculture to more sophisticated sectors like the manufacturing and ICT sectors. For manufacturing, competition should be encouraged in the cement industry to reduce rent-seeking by the producers and drive the price down. The cement industry is one the most important bedrock of industrialisation, and the manufacturing sector is a significant employer of labour.

Elsewhere, PWC surveyed the challenges of MSME in Nigeria in 2020. The survey outcome identified obtaining finance as the major problem facing MSME in Nigeria. This is not difficult to understand considering the country’s high lending rate. Furthermore, this high lending rate is aggravated by the government’s crowing out effect on the debt market with its incessant domestic borrowings. In the same guise, responders identified the cost of power as their highest daily operations cost. This looks like a double whammy problem because earlier this year, Zenith bank’s GMD identified the cost of power generation as one of the key factors that inform lending rate in the country; here again, businesses have recognised the cost of power as their highest cost component. This underscores my point earlier on the need to fix the country’s power problem so the country can benefit from its ripple effect.

In the last five years, Nigeria is taking the leading position in tech innovations, and the sector is providing an avenue for the source of foreign earning. The government should not stifle the industry; instead, it should be supported. Although we note that the industry is not a large employer of labour, it can be a learning industry for the economy, improving its international competitiveness and encouraging investment inflows.  The government should ensure that the tangible sectors like manufacturing and digital sectors like tech receives adequate attention to ensure sustainable development.

To improve Nigeria’s unemployment rate, which stands as the second-highest in the World, the human capital base needs to be developed. This is one of the priority areas where the money saved from the subsidy removal should be channelled. Advanced education and health systems have a twin impact on the economy. They improve the productivity level of the economy and generate foreign earnings. For context, India receives an estimated $3 bn in 2015 from health tourism, while the USA received $45b in 2018 from international students studying in its schools.

While writing this article, I listened to Don Jazzy’s interview on BlackBox TV, where he detailed his experience while growing up. He said when he was younger and living in Ajegunle; he didn’t know he was poor until he became wealthy and moved to the Island. I paused and had a rethink. His comment raises some questions, is poverty the norm in the country, have Nigerians accepted an impoverished fate, and are Nigerians aware that picking randomly, 1 in 3 people around them are extremely poor? 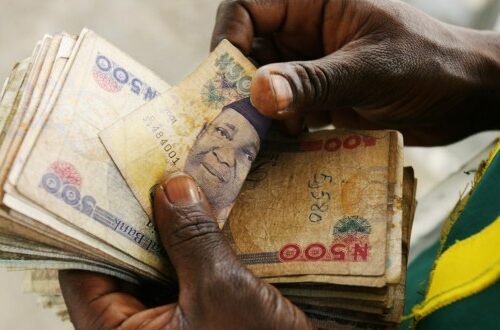 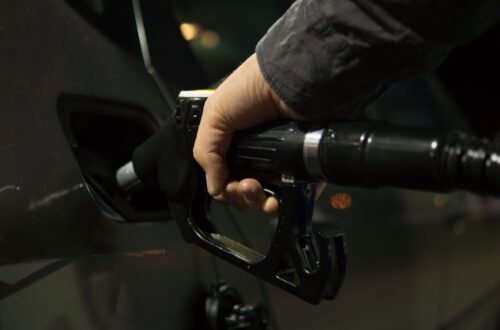 Nigeria’s Quest to Start Local Oil Refining and its Implications 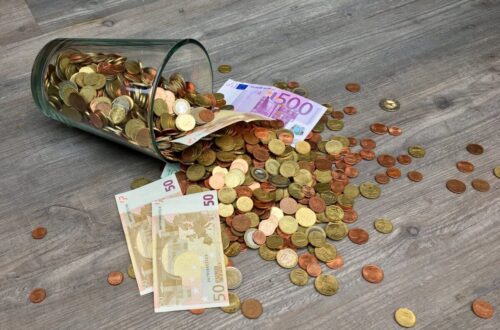